Second Week: To Maine and Back 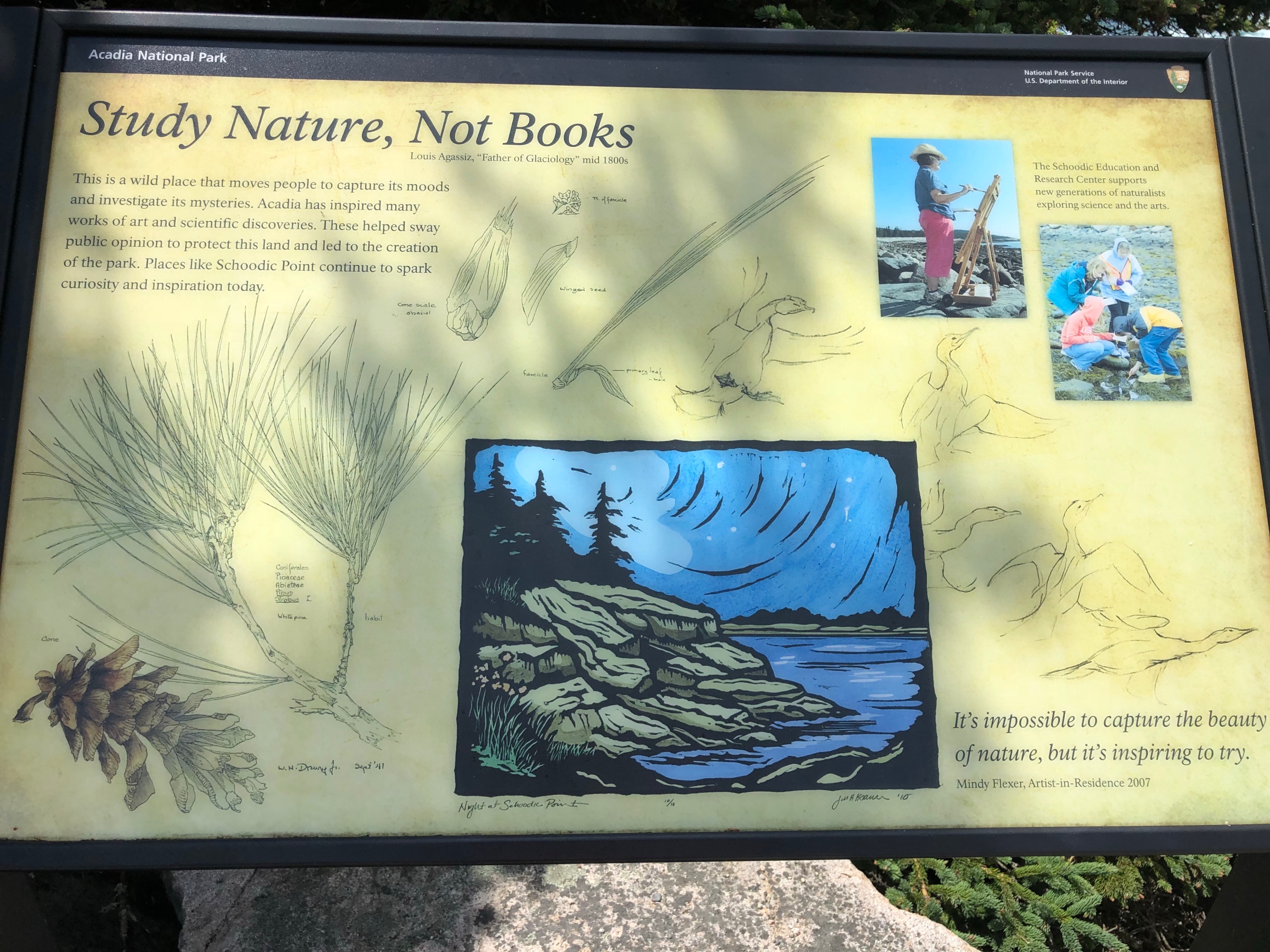 Our boys have National Parks Passports that can get stamped at every national park we go to – if we remember the passports!  We have not remembered them once since purchasing them, so we put our stamps on scraps of paper and put them in a pile to add to the passport later…which we also never get to!  Nonetheless, we decided to head up to Acadia National Park in northern Maine and spend part of a week there just hiking and relaxing…and collecting another stamp for our park passports that we left at home.

We had planned to actually camp in Acadia National Park, but there were not any open RV sites, so we found a private little campground nearby called Mountain View Campground.  It was a gem, a simple little place without all the amenities that lure touristy crowds, just tent campers and RVers – and a skoolie – sharing an oceanfront lot to enjoy the view and unwind. It was beautiful. 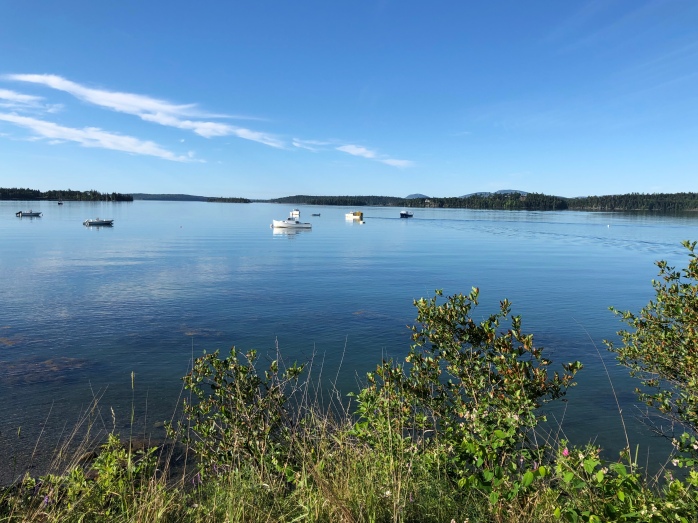 Just up the street from our campsite in Sullivan, Maine was an AMAZING seafood restaurant and ice cream shop. It wasn’t fancy – more of a diner feel – which made the prices reasonable. We ate steamers and lobster and fried clams and fried shrimp and fish fry…all fresh from the sea. 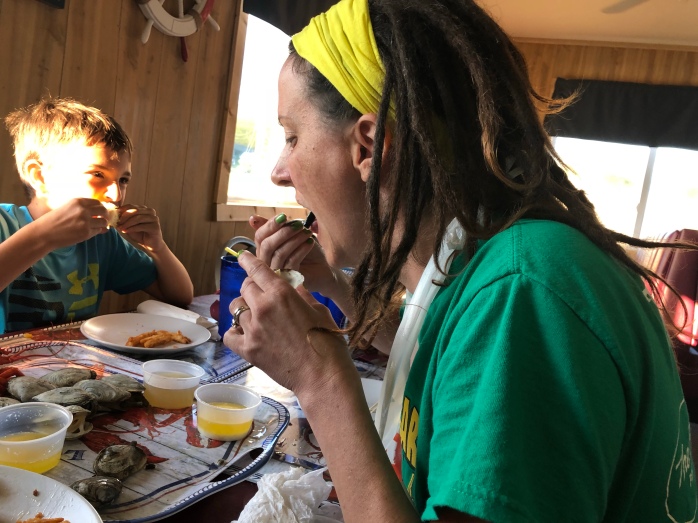 The ice cream was also extraordinary. If you’re an ice cream person like me, you know there are different variations in quality from ice cream shop to ice cream shop. I don’t know what supplier they used, but it was so creamy and delicious, and with unique flavors in addition to the usual.

Basic activities always take more time than I anticipate; this has been a lifelong flaw of mine, mis-estimating the limited amount of things possible in a given time. We were torn between just sitting and relaxing and going to various beautiful trails for hiking and swimming.  After the first couple of days, we decided to extend our stay a bit. It is really nice to have this kind of flexibility. We hiked the Schoodic Peninsula and steered clear of the island portion of the park because all the online reviews and the locals said the island is overcrowded and the peninsula is more beautiful. 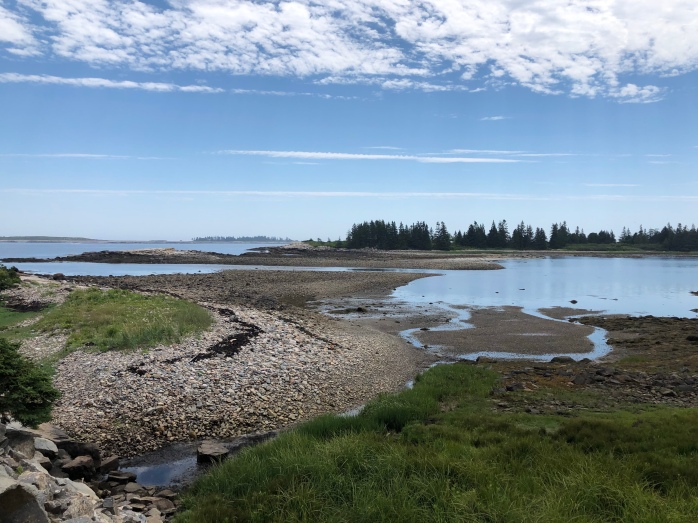 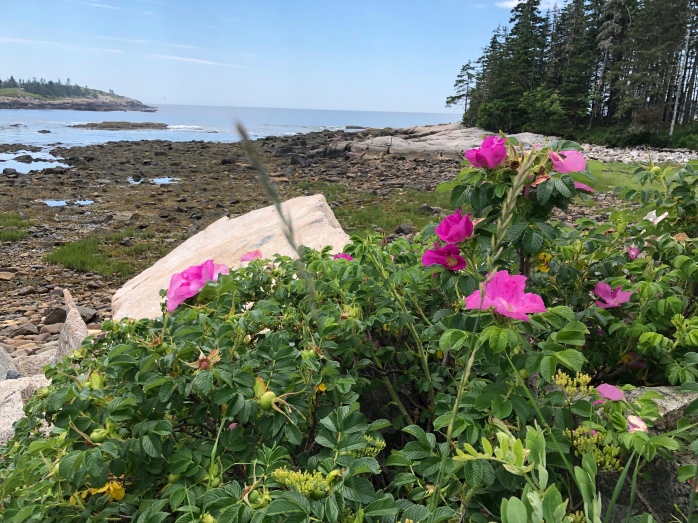 We also took the boys swimming in a couple of different mountain “ponds.” Most of us would call them lakes – huge, beautiful, and remote.  We saw bald eagles, evergreen forests, and waves crashing on rocky cliffs.

We have developed a love/hate relationship with having our dogs with us on this trip. It is so good for them – hiking and swimming and being around people…with dogs. The being around people with dogs part is the hate side; we still haven’t mastered that! Gracie gets especially excited, jumping like crazy and pulling so hard that we can have trouble holding onto her. She is so strong that we have our dogs on gentle leaders, collars that go over their noses and turn them around if they pull too hard so that they can’t get as much leverage. Inevitably, many people who see the gentle leaders think they are muzzles and then are scared. The only way to correct this misperception is to say, “Don’t worry; they aren’t muzzles.  They could still bite you if they wanted to, but they’re nice.” Clearly, that won’t help, so we just smile and keep walking. 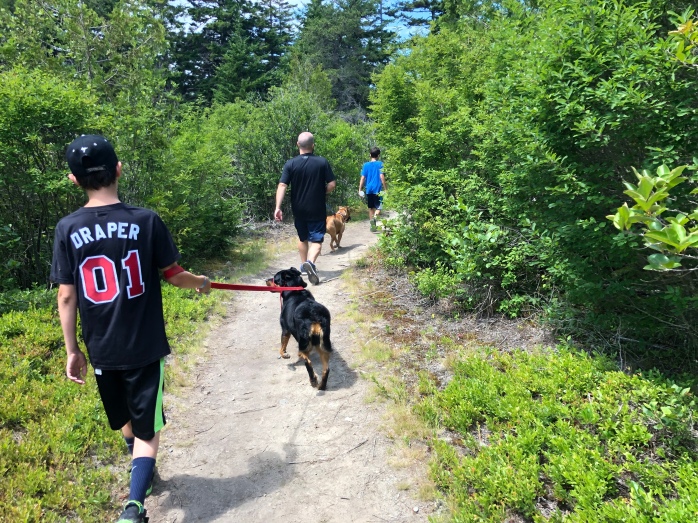 I must say that I’m not scared for a minute that anyone’s going to try to break into the bus, so I sleep well…when they aren’t barking.

We receive lots of curious glances and questions about the skoolie. I have to admit, I like being the hippie girl with dreads walking to the skoolie. Most people are intrigued and infatuated with the idea of remaking an old school bus into an RV and think we’re pretty cool. There are also those who don’t appreciate our look and our grey water run off, but you’ll have that. I think if we upgraded from spray painted silver to something cool on the outside, we might win a few more people over. 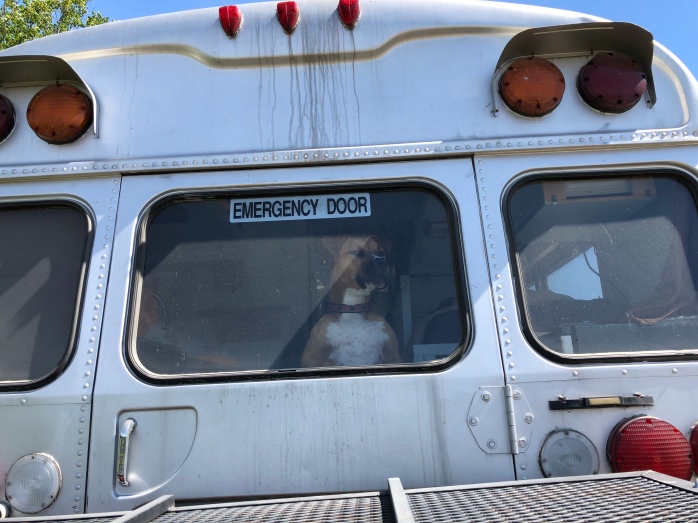 We connected with another family who had a boy the age of our kids. They had fun hanging out all week, and the dad was our mussel expert that was cited in some of my social media posts many readers likely saw.

After our extended stay, we were all ready to move on toward making the long trek home – about 20 hours of drive time. I discovered a fantastic website – freecampsites.net – and found a place to park for free overnight on the Erie Canal near Albany, NY (the capital of New York, a bit of trivia for those of you who thought the capital was NYC).   We pulled in late at night, after crossing the highest point of elevation east of South Dakota. Much to our dismay, our dogs had one of their worst barking nights yet, while we were left hoping the freecampsites.net site was accurate and that we were allowed to camp overnight in the parking lot. We spent half the night trying to shush them and were up by 6:00 a.m., ready to face the day. Since we had such an early wakeup, we were able to hike Peebles Island, look at the locks, and enjoy snacks and music at a farmers’ market before the heat of the day. The canal, the town, and the island views were beautiful, but all our phones were out of charge from going 24 hours without hookup, so we couldn’t capture it with pictures and the Relive app…probably just as well to have a gadget free hike with family and pets.

With a pack of fresh pastries, we hit the road and made our way across New York state. Our next destination is a campground in the Cleveland, Ohio area to spend a few days before finishing the trek home.  Our current discussions are surrounding the best way to prepare the skoolie for off-grid living so that we aren’t reliant on campgrounds that come with related fees and socially unique dynamics.